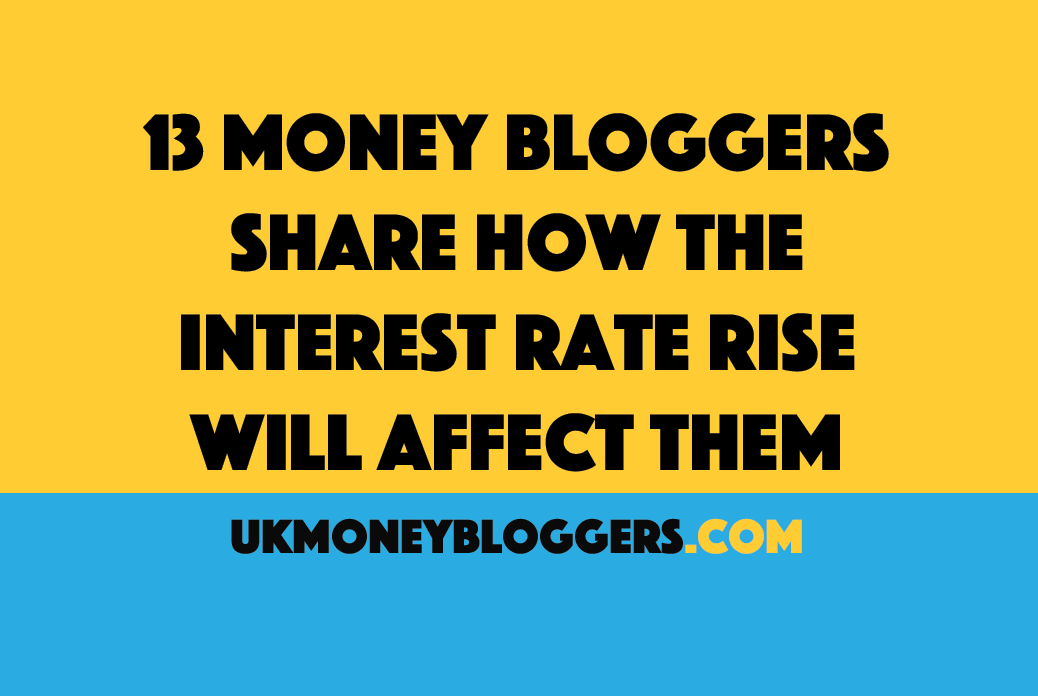 You’re unlikely to have escaped the news today that interest rates have increased for the first time in 10 years. With a rise of 0.25% to 0.5%, there’s a good chance your savings and borrowings could be affected. We asked members of the UK Money Bloggers Facebook group to share how it’ll affect them.

A quick poll in the group showed most of the bloggers are hoping savings will improve, yet half as many have concerns about what it means for their mortgage payments. Only a handful felt the increase was unlikely to make much difference right now.

Here’s what a selection of UK Money Bloggers think.

“I don’t have any debt, and I do have savings, so I should be skipping for joy at a Bank of England base rate rise after 10 long years. However, it’s still only a microscopic 0.25% and I’m willing to bet most of the high-interest current accounts I use won’t raise their interest. I can only think of a couple of accounts that pay more than inflation at 3%, so anything held in cash will actually be losing money. Stashing away savings to cover three to six month’s living expenses is still vital as an emergency fund, plus anything for big bills planned in the next five years. But beyond that, I need to focus on investing to make the most of my financial future, because cash just isn’t cutting it.”

“We got a fixed three-year mortgage last year (so have two years left). It’s hard to say if we should have got a longer one, but the increase is so small, things like your credit rating could be more meaningful when it comes to getting a good deal. That said, Mark Carney did say that interest rates do need to get close to what they were over a decade ago, so this is likely the start of more rises (though I don’t have a crystal ball!).”

I am worried that my next year remortgage deal will be affected and that my mortgage will be more expensive. Sadly it’s also becoming harder to save money on the regular saving accounts so I m hoping to invest in ISAs with some bond and shares as components.

For me, the jury is out. Mark Carney says that UK households are well-positioned for the rise, but I worry that with high inflation, low wage growth and the stranglehold of consumer debt, there are a lot of people who aren’t best primed to reap the benefits of better savings rates. In our own household, our mortgage is fixed for the next two years, but I am already nervous that when the fixed rate expires, the new deals on offer are going to be relatively expensive.

We bought our first house 13 months ago, fixed for 2 years. Will consider our options next year but obviously worried about it costing more and my partner has just had a pay cut as well

A mortgage isn’t a worry for us as we have three years remaining on our five-year fixed rate. Would love to be earning more from our savings though as they’ve not really been growing much since we bought a house and Santander slashed the rates on the 123 account which we used to do really well out of.
Fiona Hawkes  savvyinsomerset.com

I’m mortgage free but worried the interest rise may see my rent rise too if it affects my landlord. On the plus side my savings should work harder.

I’m hoping that my savings pot will be able to earn more money ready for buying a house next year. I am also worried about mortgage payments being higher when we do buy.

I’ve just remortgaged my house so the rate is fixed for 2 years. I can reassess in 2 years time

The increase is so small, it’s not going to make a significant difference to savings really, so I will stick to investments where possible. Our mortgage is on a fixed rate, so feel covered from that aspect, for now…

My mortgage rate will go back up to what it was a year ago – I’m not worried at all about it though. We’ve factored in incremental rises and purposefully borrowed a low amount, so a quarter of a percentage point amounts to a few pounds a month.

People who already have problems debts will find any mortgage rises, however small, hard to cope with. And this applies even if they are in an IVA where they will be less able to afford the agreed monthly payments.

Personally, I’ll be seeing a small increase on my tracker mortgage but it will be manageable. However, I’m not optimistic we’ll see the increase passed on to the highest paying savings accounts which currently are with current accounts. But I’ll wait a few weeks to see how the banks have reacted before decided whether it’s worth moving my money around.