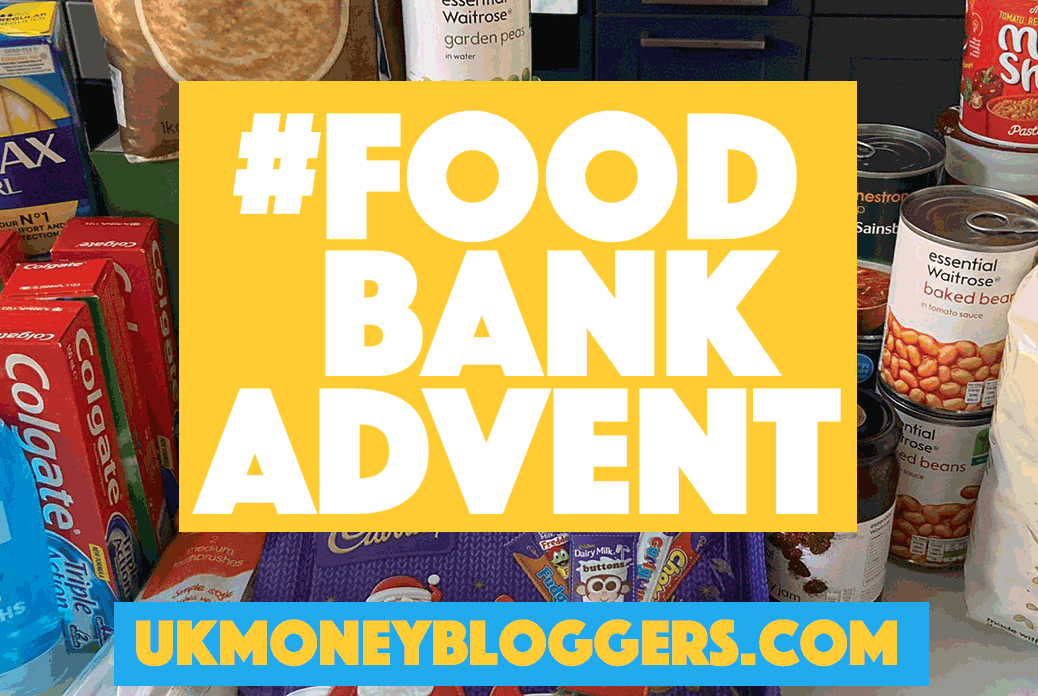 Can you help get more food and essentials to those that need it this Christmas?

2022 will be the sixth year our money blogging community has banded together for our #FoodbankAdvent campaign – and this year it really is needed more than ever.

What is a reverse Advent calendar?

It’s a really simple idea. With a standard Advent calendar you open a window or door each day during the first 24 days of December. Though traditionally you’d just see a picture behind that window, you’ll now get everything from chocolate and toys for the kids, through to beer and cheese for adults.

A reverse Advent calendar is different in two very important ways. First, it switches it so that rather than taking something each day, you put something in. For our #FoodbankAdvent campaign it’s essential food and toiletries.

Secondly, you do it a month early, so throughout November. This is key as it allows you to donate your advent box at the start of December.

How to take part

It’s really easy and anyone can do it (you don’t have to be a blogger!)

At its most basic, you just find a box or two and add your 24 items to it throughout the month. You then donate that (more on this below).

The next level is to share your progress on social media (do use the hashtag #FoodbankAdvent) to encourage others to join in.

Why put something in each day?

The Foodbank Advent campaign isn’t just about encouraging people to donate food to their local foodbank.

It’s also about raising awareness. First about food poverty, and second about how to help.

If you are sharing your progress each day throughout the month (on social media or just with friends), it helps keep the campaign in people’s minds – and hopefully encourages more people to join in.

Plus, it keeps the cause fresh in your own mind each day, rather than just a one-off gesture.

Practically, it’s probably easiest to buy items in one go or once a week rather than going to the shop every day – especially since the new lockdown measures encourage us to stay home more. But that shouldn’t stop you from following the reverse advent system.

Here are a few examples from previous years we’ve run the campaign:

The first things for my Christmas food bank hamper ☺️ are you joining in this year? #FoodBankAdvent pic.twitter.com/lAN8Wftkuf

You might be thinking, surely it makes more sense to do this during advent and hand something over on Christmas Eve so needy families have something to open on the 25th itself.

Though that would be lovely, it’s not practical!

First, foodbanks aren’t open every day of the week like a supermarket. It could just be one or two days a week. Donate too late and it might not get used until the new year.

Plus, your donations don’t just go to a single family. Instead, foodbanks divide them up into essential parcels that’ll last a family three days.

This takes time – your donation will need to be collected and then sorted by foodbank volunteers. Donating at the end of November or start of December means that food can be distributed throughout the month as people need it.

Of course if you start later that’s fine, as people will still need supplies in January (just avoid anything too festive).

Dropped off my #foodbankadvent reverse advent calendar at the new Hadleigh food bank yesterday, ready for distribution before Christmas.

What to include in your reverse advent calendar

Though some reverse advent calendars include toys and craft materials, we’re encouraging you to focus on food and toiletries.

First you should find out what your local food bank needs as every food bank will have a different need. Some will have tins of baked beans coming out of their ears but be completely out of toilet paper. Most will share this information on their social media or website.

Also, you should be focusing on the items that go into a foodbank parcel. These are long-life and essential items such as cereal, rice, UHT milk and deodorants. You can see a typical food parcel here and non-food items here.

You might want to add in a few equivalents for those with dietary requirements – just remember it needs a really good use by date.

It’s best to avoid anything which is a bit weird as these can’t be included in the food parcel. Though they’re distributed to people, it’s better to make sure your foodbank has enough of what it needs rather than a few jars of olives.

Seeing as it’s Christmas you might want to include one or two festive items – but don’t go overboard! Remember, some of the food you donate might not be handed out until January.

If you’ve been collecting a #FoodBankAdvent, now is the time to donate to your @TrussellTrust foodbank. Here’s a cut-down, Twitter-friendly version of a video going through what I’ve collected & why. The full version & more details here: https://t.co/OX7tbHXb3s @UKMoneybloggers pic.twitter.com/GRT7G3259q

Not everyone will be able to make it to a supermarket right now, but you can still support your foodbank.

There are a number of costs that come with running a foodbank, from warehouse storage through to powering the lights. So you can instead make a financial donation to your local foodbank or the national Trussell Trust organisation.

How to donate your reverse advent calendar

Many supermarkets will have an area for you to drop off donations, and this can often be the easiest way to deliver your collection.

You can also search the Trussell Trust website to find your local foodbank, which might have more details about how to give food or money.