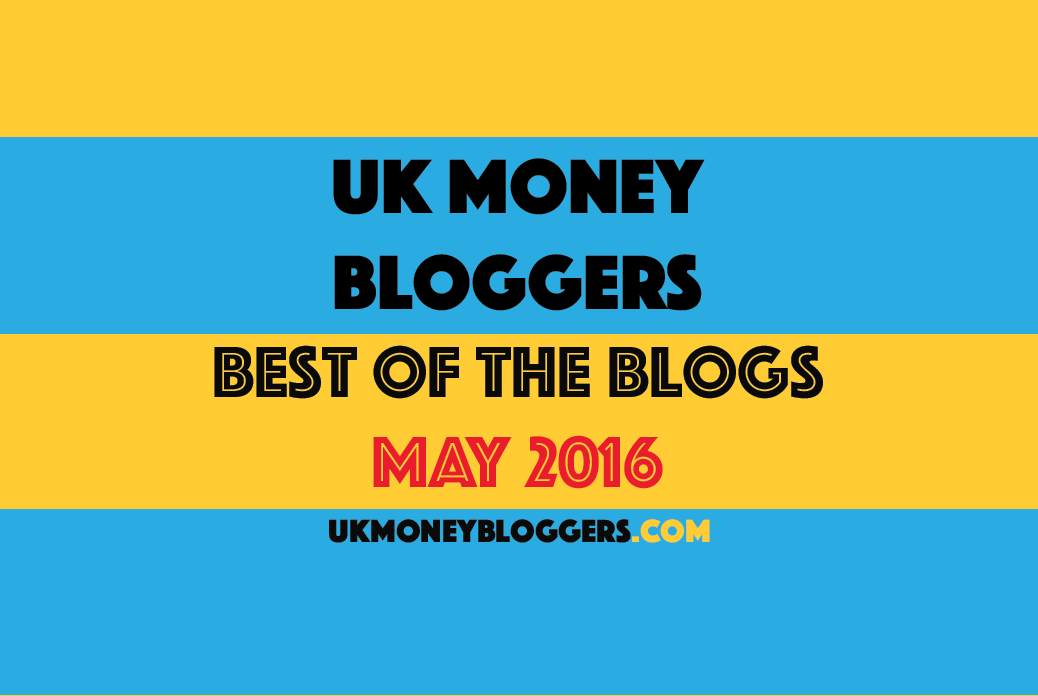 Money bloggers cover a lot of ground! This month’s round-up has 14 posts with topics including money making apps, ways to spend, housing deposits, weddings and fish pie! Each of the following have been picked by the blogger as the top blogpost they published in May 2016.

Emma of From Aldi to Harrods chose April 2016 Income Report as it’s “…been a really great month for me.”

Esther from Money Nuggets chose Great Money Habits to Teach Your Kids.
Esther picked it because “To raise financially successful kids, it’s crucial to teach them some great money habits no matter their age.”

David Jack Taylor from Thinking Thrifty chose Consumerism: A Champagne Lifestyle On Lambrini Wages. David says it’s about “How the influence of my granddad started me off on the right path, and how I fell off track spectacularly and got sucked into a life of consumerism.”

Jenni from Can’t Swing a Cat chose The Realisation I Don’t Actually Have To Get Married Has Made Me Feel £20,000 Richer. She picked it to include here as ‘It recently occurred to me that, despite my dreams of getting married one day, I could spend that money on so many other things. There’s no point in landing yourself in debt or taking money away from life’s necessities for the sake of one special day.”

The Realisation I Don’t Actually Have To Get Married Has Made Me Feel £20,000 Richer

Andy Webb from Be Clever With Your Cash chose Cash? Credit? Debit? How I choose the best way to pay to show “spending isn’t as simple as just whacking it on plastic or fumbling for change.”

Cash? Credit? Debit? How I choose the best way to pay

Zoe from EcoThrifty chose her interview with Money Principle Maria Nedeva as she really enjoyed interviewing Maria for this blog post.

Lynn from Mrs Mummy Penny chose Free money saving activities for the family at half-term as “My favourite article of the month is this one, to help families spend little or no money over half term.”

Maria from The Money Principle chose Bank of Mum and Dad: Where do You Stand in the Dance of Generations?. Maria picked this one because “There is a lot written by younger bloggers about saving by moving back home to live with their parents. I’m on the other end of this – we still support grown up sons and it’s hard to see the end. What’s more, I’m not convinced we are really helping.”

Jon from The Money Shed chose How to earn thousands with Field Agent, Roamler, Task360, Bemyeye etc. as “It shows that the money is out there for anyone to earn if they are just dedicated enough and have the right mindset!!!”

Jane from Frugal Queen chose Saturday alterations tunic to fit. Jane says of the post “I try to dress well but things don’t often fit me so I alter them myself. I also buy charity shop clothes and upcycle them, a few tiny sewing skills save me so much money.”

Hayley from Disease Called Debt chose Oops!… I (Nearly) Did It Again

Oops!… I (Nearly) Did It Again

Stonking fish pie with Fried Leeks only £1.20 per portion

Sara from Debt Camel chose Save for a house deposit or pay off debt?. “How do you balance paying off debt and saving for a deposit? It’s not always an easy choice.”

Save a house deposit or pay off debt?

Miss Thrifty chose Ice cube trays: how do you use yours? as she’s “had some good feedback on this one.”

Ice cube trays: how do you use yours?