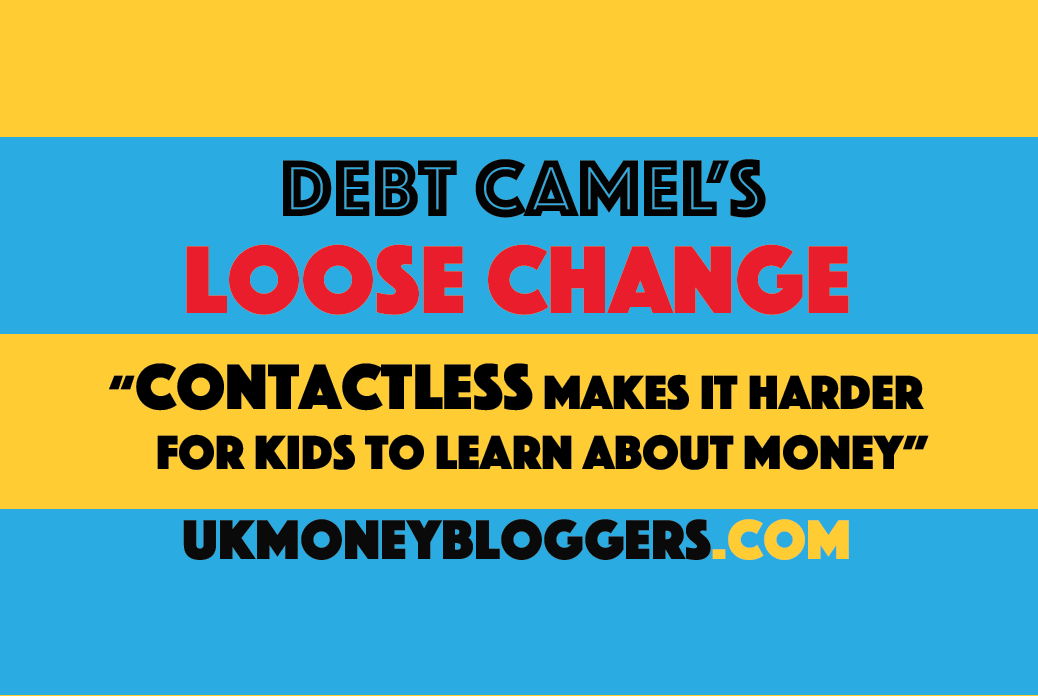 Money bloggers have plenty to say, and Loose change is their Speakers’ Corner. This week Sara Williams who writes about debt and credit problems at Debt Camel shares her fears for our kids when tap and pay becomes the norm.

But the number of times the contactless cards are used jumped a massive 170%. And nearly one in ten people in Britain no longer regularly carries loose change at all.

There has been a lot of speculation that this is encouraging people to spend more than they want to. Somehow physical bank notes and coins felt much more real – just tapping the card doesn’t seem like spending.

Even using a non-contactless card required you to focus on the amount you were paying as you entered your pin – but now you can be chatting to a friend or thinking of something completely different as you make a contactless payment. People often can’t remember just a few seconds later what they have spent so it’s harder to keep track of your finances.

One aspect which hasn’t been talked about so much is the long term effect this will have on children. I think we would all like our kids to have more lessons in school about interest rates, how to spot scams, choose a good bank account or credit card and the importance of long-term planning like pensions. Much more useful than half the stuff they do get taught! But those are topics for secondary school. Long before then children will have picked up the fundamentals about how they think about money from watching how their parents behave and listening to what we say.

So what will they learn when they see adults using contactless cards more and more and “real money” becoming a rarity? Not much that is of any use 🙁

Even before contactless cards, money in the twenty-first century was already pretty mysterious. People seem to complain about it, but mum just gets it out of a hole in the wall when she wants some. Or she asks a supermarket to give her some cash when she’s done the shopping – perhaps it’s a reward for buying so much?

Adding a contactless card to this means that the “paying” part is over so quickly a child can miss it. This is the flip side of the speed and convenience adults – including me! – love about these cards.

Apps and digital stuff for kids

As a further complication, the toy industry is busy introducing as much digital technology as it can, from toy shopping tills with fake card readers to the money in Monopoly being managed through a Digital Banking Unit.

From the industry’s point of view, I guess it looks modern and cool. But once again the effect is to lose the physical reality of “Passing Go” and getting paid money you can hold in your hand. Money that you then spend … and when there isn’t enough left you can’t buy any more.

Let’s go back to the basics of learning about money

If you are playing with 3-6 year olds, they need to know something about numbers before they can be good with money. If you don’t know that five is bigger than three, then you can’t understand about “getting change” for your “five-pound note”. Nor why you can’t buy something for £5 if you only have three pound coins.

The great thing here is that kids really want to learn about shopping and buying things. At that age they don’t care about abstract concepts such as numbers. But they will have fun serving you pretend cups of tea and slices of pizza all afternoon while you hand over coins. Along the way they get to really understand what “bigger” means and the order of the numbers and that when the money has run out, you can’t buy any more.

So by playing shops or cafes with them, using pretend food but physical money, they are finding out the basics of money and counting at the same time. It can be real coins, pounds and pennies, or pretend money, what matters is that they can count it out, one at a time and hold it.

Sara Williams writes at Debt Camel and is part of the UK Money Bloggers community.

One thought on “Loose change: Contactless cards make it harder for kids to learn about money”