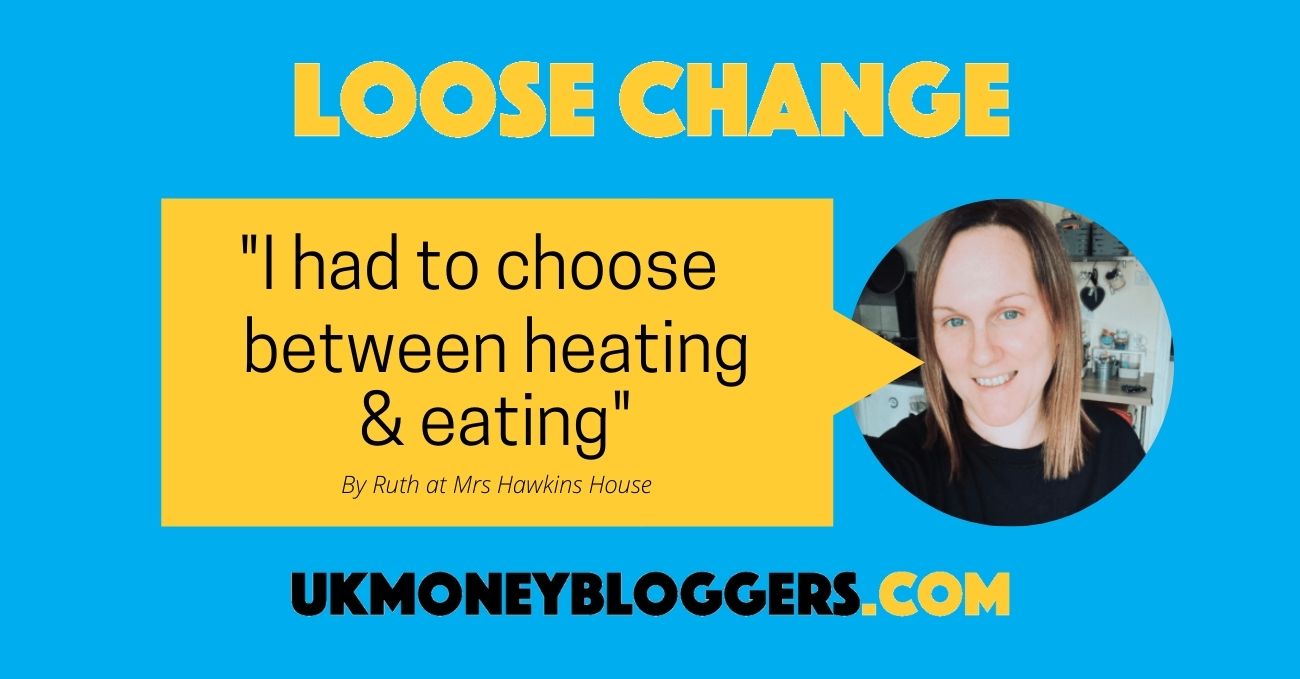 This week Ruth from the Mrs Hawkins House blog shares how she learnt to cut her bills.

Food poverty is a topic close to my heart. I skirted off the experience after a relationship breakdown over 10 years ago. I was in a full-time job, renting privately and didn’t qualify for social housing or any type of housing benefit at that time.

It was 2011 and we were still in the grips of the recession. I was to the pin of my collar week in week out moneywise and personally. Even though things were tough for me at that moment in time I had a deep sense that I could have been much worse off. Work was plentiful and I knew that if things continued to be this tough I could apply for working family benefits.

Six months later I did just that. There was a long waiting time for the payment to come through. Over the course of the next three months I experienced food and heat poverty in a very real way. I could not make ends meet no matter how hard I worked or how steeply I cut back on expenses. As the winter closed in in my poorly insulated rented house, heating was costing me a fortune on a monthly basis. I was in a situation that I never thought I would be and had to choose whether to ‘heat or eat’.

My children ate, the heat was turned on and I skipped meals. A friend who knew that things were tough bought me some cheap cigarettes from Europe a few times that year, so that winter I survived on a diet of hot drinks and nicotine.

This period of my life passed as the working family benefit came through just before Christmas 2011. I could fill my cupboards and my oil tank with the arrears from this payment. Every week the working family benefit that I received from this point onwards was the difference between a life of absolute drudgery or a life of dignity. It allowed me to stay in work and to look after my family with a sense of hope and pride.

This experience is from outside the UK. I have close ties within the UK and I am moving there in July to get married and to buy a house. It is not wasted on me the enormous impact that the removal of the universal credit uplift will have on families all across the UK this winter. I am reminded of the sheer terror I felt on a daily and sometimes hourly basis in winter 2011. The mental gymnastics of food and heat poverty is degrading and exhausting in equal measure. It has left a lifelong mark on me.

In 2008 there were approximately 25,000 food bank users in the UK. In 2021 there were over 2.5 million food bank users. Undoubtedly recent global events have impacted heavily on those numbers but the 13 year comparison is staggering nonetheless. In a study on the ‘The proportion of children living in poverty in the OECD countries in 2018’, the UK is at no.13 worst performing on this grim scale.

Today I see a glaring problem as I prepare to make the United Kingdom my home. With COP26 fresh in our minds, does this drive to drastically reduce carbon emissions in the short term serve governments to more easily impose economic strategies and tax arrangements that will without question discriminate against poor people by disingenuously using the climate change issue? Will it allow them to silence the voices of the already voiceless by using the carbon issue?

Poor people can’t take any more. They can’t afford to lose the £20 universal credit uplift as it is. While the cost of living rises with increased food and fuel prices I wonder this winter as I am warm and well fed, how many mums and dads are questioning again tonight whether they need to eat or should they just turn the heat on for the kids coming in from school? Many will make the noble yet desperate decision to not eat. I heard the now famous poverty activist Jack Monroe say once, following their own grinding experience of food poverty that, ‘’there is no nobility in poverty’’.

It is high time that we do better not just for the few but for everyone and I fear that that won’t happen as the greenwashing and duplicity of governments neither addresses climate change or poverty in any meaningful way.

Articles in the Loose Change series are written by members of our community. The views do not necessarily represent those of UK Money Bloggers or other members. The articles should not be taken as financial advice.