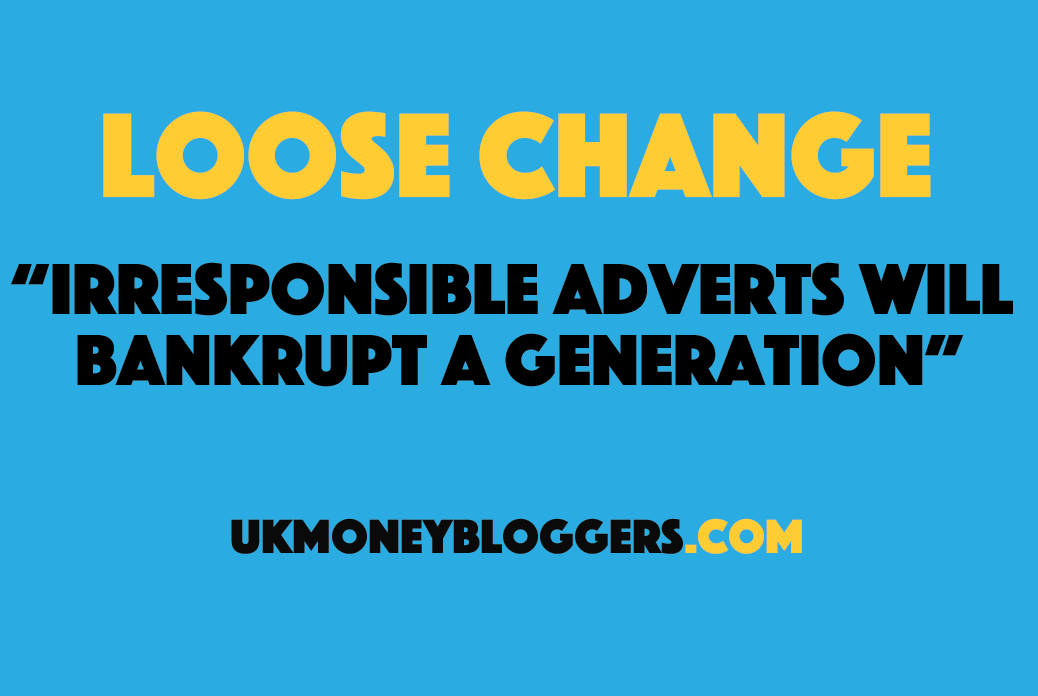 This week, Tracy from Mind Over Money Matters vents her anger over money lending ads on shows aimed at young people.

How these adverts will bankrupt a generation.

I need to get this off my chest as it bugs me EVERY time we watch Friends on Comedy Central. Friends is a family show, watched by kids and adults alike.  Between 8 and 16 episodes of Friends are being shown every day. Comedy Central has over 13 million viewers a quarter.

We are used to seeing adverts and the ones from Amigo loans and Barclaycard are 100% the most dangerous, depressing and clever adverts on TV at the moment. This sponsorship of Friends by Amigo takes the danger to a whole new level.

The goal of advertising is to get people to act. Whether that action is to get out their credit cards and buy, or ask for more details, getting you to act is the purpose. There are plenty of great adverts which win awards for creativity, get people talking or are entertaining but the really clever ones slip into your subconscious mind, and lurk, so that when you have a situation, that’s the product you think of. Whether you act straight away or in the future doesn’t matter.

My favourite adverts are the Haribo ones, absolutely love them. I have a clip of a ‘big big sandwich’ on my phone which I look at if I’m feeling grumpy. Would I buy Haribo’s for myself? No, to me they’re as appealing as chewing a sugar-coated rubber band, but their marketing strategy has created a very successful brand, making Haribo the first choice for sweets, selling a fun lifestyle experience.

The same marketing  techniques are used by Amigo loans and Barclaycard and between them they are creating a mindset that will ruin so many lives.

For an advert to be successful it needs to have many factors, depending on the target audience. These are the particularly evident ones used in by Amigo Loans and Barclaycard.

The Familiarity Factor – People don’t start seeing an ad until the seventh time. Repeating the advert not only breaks down the walls of disinterest, but with each repetition, the ad also gets exposed to those who may not have noticed it last time, and as we (the audience) grow more familiar with the message, a feeling of acceptance begins to grow and as this acceptance strengthens, we start to feel comfortable. Comfort leads to greater trust.

Social Proof – We are significantly influenced by the behaviour of others, our actions are shaped by how we think others behave. However ‘facts’ can be presented in different ways, and used to give us a false reality. Like ‘join thousands of people’ makes us want to act like those thousands, they can’t be wrong. There are over 55 million adults in the UK. Running an advert saying ‘ are you one of the 55 million adults that haven’t joined us’ wouldn’t work. But it’s just as true.

Authority – Just as we trust the word of a Doctor, we generally accept the Authority of any official-looking person who endorses the product. Equally, paying a famous or authoritative figure to promote a product allows consumers to simply accept the facts and claims as being true, no questions asked.

Lets look at a couple of examples.

The clips show these scenarios

A pregnant lady, decorating a new home with help from a friend.

A bloke who has a new car thanks to his friend.

A happy bride at her wedding courtesy of mum.

These clips are shown before every episode and at the end of every ad break. Over and over. You probably aren’t paying attention, not really noticing much. The message these little clips are planting in your mind is If you want something that you can’t afford, easily solved, you can borrow the money. If you can’t borrow then someone can borrow for you. That’s a great thing to do for your loved ones.

Amigo founder James Benamor has just banked a £2.9m dividend. To me, his moral compass is clearly off.

To increase their profits, what Amigo realised is that they need new customers. Not just those who ‘borrow for emergencies’. They are creating, even grooming, a new customer base. From an early (Friends) watching age the message viewers are receiving is BORROW MONEY. Those 12-year-old watching friends now are the customers of the future and their friends and parents are the willing guarantors.

The Amigo Loans adverts proudly announce that they have ‘helped‘ over 300,000 people. See how they slip in the important ‘social proof’. No mention of their extortionate rates then, borrow £1000 over 12 months and you repay an extra £236.17 in interest, maybe that doesn’t sound too bad, only £103 per month. Wait though, this is a guarantor loan. Guarantor loans are a whole different post. For now though – they are a VERY VERY bad idea.

This one really, really bugs me. Simon Cowell talking about how he didn’t know you could choose the amount of interest you pay off your credit card bill. Does Simon Cowell actually use this feature? He is worth over £100 million so unlikely!  But using the tried and tested ‘people listen to celebrities’ marketing ploy, coupled with a story that engages the audience, shown often and at peak times, this really brings the message home. Yes you can choose the amount of interest you pay on your credit card debt. Flipping genius.

What he does not say of course is that credit cards should always be paid off IN FULL. Credit cards are brilliant for cashback, Airmiles, loyalty points, S75 protection etc but you should NEVER pay interest. Always pay off IN FULL. Martin Lewis has been telling us this for so long, how has Simon Cowell never heard? Barclaycard doesn’t mention this either, why would they, that’s how they make their money. But you can choose the amount of interest you pay. How wonderful.

Human nature will generally mean we chose the ‘least pain’ option. In this case that will be the least amount of monthly payment. Genius. That means the majority of people will choose to pay the interest at the smallest amount over the longest time. That means more interest in total. Thanks Simon. You hid that one well. How much did you get for selling your soul?

Can we just get some common sense and sanity back please? One. I don’t know how these adverts are allowed. Two. How can we get our message across when the media are constantly telling us to BUY and BORROW. Oh and GAMBLE, but that’s a whole another article too.

There is a generation growing up wanting fancy cars, holidays, handbags, expensive phones and trainers. The same generation that is being brainwashed into believing borrowing is the norm, borrowing is the way to get what you want. You only live once right!

The reality of succumbing to this belief is a lifetime of debt, pressure and misery. Personal debt in the UK is rising at a steady rate. If this continues then the teenagers of today will be the bankrupts of the next decade.

How can we send a message stronger than Companies like Amigo Loans and Barclaycard?

We need to remind people:

If you cant afford it now then you can’t afford it in the future with interest.

Live within your means. Find a way to do what you want, in a way you can afford.

What happened to saving up? A wedding, a car, a new place, a holiday. The pride and enjoyment of something you have put effort into doing is priceless.

If you can’t afford something then either find ways to earn more money or ways to cut down expenses, or a mixture of both.

At the end of November 2019, the UKs total unsecured consumer debt (so not including mortgages) was £225.3 billion. There were 30,879 individual insolvencies between July and September 2019. That’s equivalent to 336 people a day or one person bankrupt every 4 minutes 17 seconds. An increase of 22.7% on the same period the previous year.

Next time you see the Amigo loans or Barclaycard adverts. Think of Amigo founder James Benamors £2.9m dividend and Simon Cowells £111 million fortune and you’ll see how they got so rich.