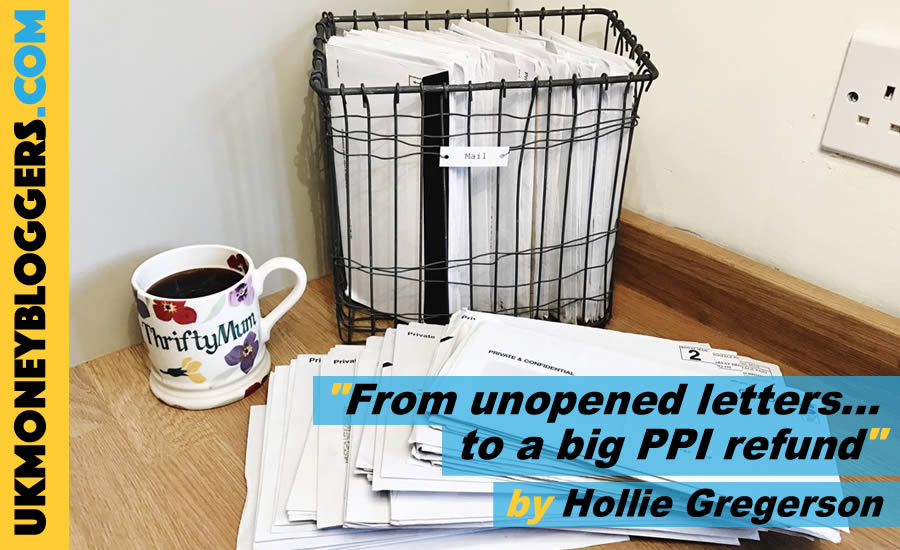 This week’s Loose Change is from Hollie Gregerson, who began www.ThriftyMum.com in 2016 whilst starting maternity leave. It’s a growing blog and online community for savvy parents who want to continue a great lifestyle whilst juggling the financial constraints of bringing up children.

When I first started going out with my now husband I asked for a small amount of wardrobe space. However the space he allocated to me was filled with unopened envelopes. It drove me crazy seeing them! You don’t need to be a psychologist to know that not opening envelopes is a sign of hiding from something. He allowed me to box them up and agreed he would sort through them at some point.

Of course “at some point” never seemed to come around. The envelopes were from banks and this made me anxious. I had read that once married, our finances would be linked and therefore his credit rating would affect mine. I’ve always been careful to look after my credit rating so knew this needed sorting.

Eventually we worked through the envelopes and they dated back over ten years and included some notices about missed credit card and loan payments. We had a chat about his credit history so I understood what I was taking on.

After a TV appearance by Martin Lewis from Money Saving Expert talking about payment protection insurance, I came across the forms on the MSE website which anyone could download. You fill in your details and send off to the banks to claim by yourself. I got them printed off and shoved them under my husband’s nose. The forms naturally got added to a pile of other papers and left…

After two years of waiting, occasionally nagging, an engagement, a house move, marriage and baby on the way I finally caved and filled the forms in for him and got them sent off.

At 22 weeks pregnant in June 2015, we received a letter in the post to say that we had a claim and one of them was to cover a £10k loan my husband had had straight after university. It wasn’t until a few weeks later we got the news…we were due compensation of mis-sold PPI payment protection to the amount of £12,782. We couldn’t believe it! It was such great timing as I was about to go onto maternity leave.

My husband got a call later that month about another claim we had submitted and they asked him to recall the wording used at the bank when this specific loan was agreed. The meeting had been almost 15 years ago! They refused to pay out on that one as there wasn’t enough evidence of the mis-selling. We were happy with our award though.

Once we sent the MSE forms off, the decision only took about six weeks to come through. On top of what the banks owed us back, they also had to pay annual interest!

A Reward for Having Debt?

I have to admit I did feel a little jealous. It felt like he was being rewarded for having taken out loans, something I’d never done. However he still owed money on various loans and he probably would have cleared them if all that extra PPI hadn’t been added. So this compensation went to pay those off and we were only left with a few thousand to enjoy. This brought our monthly outgoings down significantly and took the pressure off us in time for me going onto maternity leave.

The photo above isn’t from years ago. I recalled my husband bringing a big metal concertina file from our old house and he said he would sort it. (Story of my life!) Anyway, he’s working away from home this week so thought I’d check it. These unopened envelopes are from that. So I started working my way through them and have found statements from an old Barclaycard with £20 a month card protection payments! Looks like I’ll be putting in another claim!!

The FCA have announced this week that there is now a deadline for PPI claims – August 2019.

During the years of waiting, I had been so tempted to accept one of those cold calls from PPI claim companies just to get it over and done with. I’m so grateful we held off. I would have regretted giving away a third of our compensation when the process to do it ourselves was so simple. In fact it’s even easier now as you don’t need to know bank account or credit card numbers.

Claiming our PPI left us debt free at a time when we were counting every penny. I’m pleased to say that we have not accumulated any debt since. My husband is officially a convert to only using credit if it means we get added insurance from the credit card and we can pay it off within the month.

If you know you have previously had PPI or you’re not sure, you can complete the forms and send off a claim. The banks will do all the hard work for you. You have nothing to lose! Find all the help and information you need to DIY your claim here .

4 thoughts on “From unopened envelopes to a huge PPI refund!”