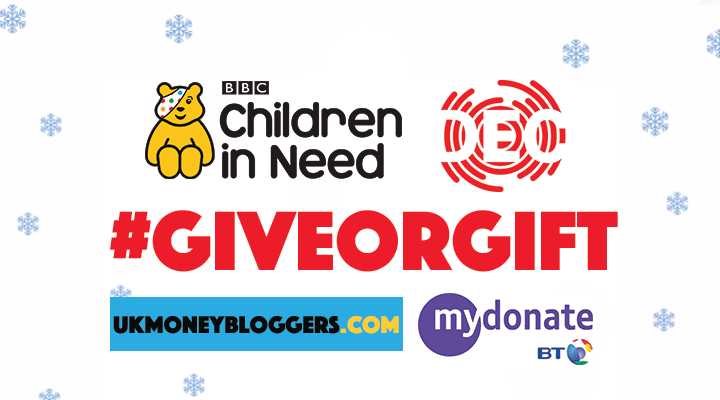 If you’re fed up with gifts that you don’t use, there is an alternative. UK Money Bloggers and BT MY Donate have come up with a way to make the give you receive actually a donation to charity on your behalf.

It’s really easy to get involved. We’ve sign-up sheets, posters and even certificates you can print out once you’ve made the donation.

If you take part in #GiveOrGift, the money will be supporting six charities. Here’s the second in three blogs telling you about each of them and why we’ve picked them for the campaign.

Why we’re supporting Children in Need

Christmas is all about giving and there’s nothing more warming than knowing that you’ve helped a child feel safe, happy and secure.

Every year Children in Need, BBC’s corporate charity, raises money to fund projects that will help disadvantaged children across the globe. These projects tackle poverty and deprivation and help children who have been neglected or abused. It also helps fund disabled children, allowing them to reach their potential.

Without the donations, these projects can simply not go ahead and every penny counts – imagine what every Secret Santa contribution could do and how many more children can be helped?

Every year we see the BBC launch a fundraising day, where everyone joins Pudsey the bear, the Children in Need mascot, raise some serious cash so that the charity can continue providing grants to people who need it, but sadly, once that days is over, the charity doesn’t get as much attention or donations.

So, this year lets get Santa involved and give the cash you would spend on the so-called Secret Santa and donate it to the charity instead.

Your donation will make 2017 a better one for thousands of children and young people around the world.

By Olly Cator from Savvy Dad

Part of the role of DEC is to raise awareness of global crisis via their appeals process. They also work with 13 of the UK’s largest aid charities to support efforts globally in attempting to support tackling large scale humanitarian crisis.

Appeals over the past few years have included the ongoing Ebola crisis, supporting efforts in the wake of the Nepal earthquake, and the ever important work with aid agencies helping displaced and besieged communities. Conflict in Syria and South Sudan is very much at the forefront in their efforts currently.

The DEC, otherwise known as The Disasters Emergency Committee, seeks to quickly and collaboratively react to a crisis. This can mean using donations for promoting an appeal in the media with corporate partners, or providing funds directly for relief and aid initiatives. 94.1% of donations go directly into on the ground aid support, with the remaining 5.9% being used to highlight an appeal via publicity.