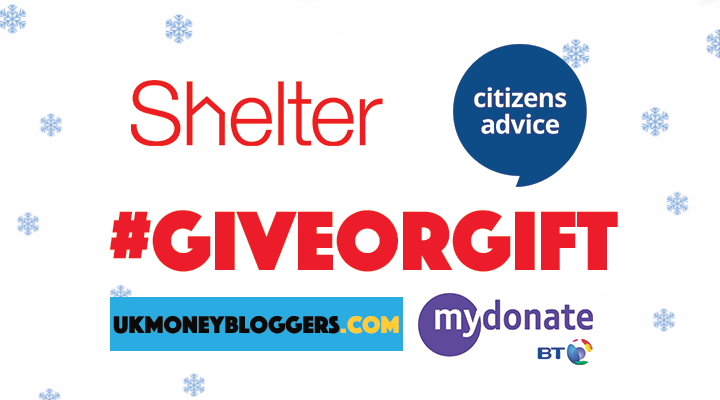 When people say it’s the thought that counts, does that mean you can forgive them when they’re spending money on something you don’t want or need? Wouldn’t it be better if the money went where it really will make a difference?

That’s the idea behind the UK Money Blogger and BT My Donate Christmas charity campaign #GiveOrGift, where you ask for a donation instead of a Secret Santa or other gift.

If you take part in #GiveOrGift, the money will be supporting six charities. Here’s the second in three blogs telling you about each of them and why we’ve picked them for the campaign.

By Sara Williams from Debt Camel, and is also a Citizen Advice Bureau volunteer

Lots of people don’t realise Citizens Advice is a charity – it’s just there when you need it. It was set up in World War Two when rationing and evacuees were some of the common problems. The huge range of issues we now cover are summarised in this Advice Trends in 2016 report.

Ten years ago credit cards were the most common type of debt problem, now it’s council tax arrears. In employment, we have witnessed the numbers of people now having to manage on insecure incomes from zero hours contracts. Twice as many people are now renting privately as ten years ago.

Helping 700,000 families in the last year, we see the changes as they are happening in our society and can use our statistics as evidence to campaign for improvements in the law and regulation. Some of our current campaigns include scams-awareness, more security for the self-employed, making it easier to switch energy suppliers and better rights for renters.

You – and your children and your neighbours – would miss us if we weren’t here, so help support our work!

By Tom Church from Latest Deals

This Christmas, 120,000 children will be homeless. Across the country 255,000 have no permanent home. In Westminster, Central London, one in 25 is living in temporary housing such as a hostel, or nothing at all. On the streets.

Shelter is a housing charity that began by shining a light on hidden homelessness in the sixties slums. Their work helped to lift those troubled times. Now, 50 years on, a modern-day housing crisis grips the country.

Mandie, who was renting a flat with her two daughters, was evicted after being made redundant and falling behind on rent.

“We stayed in a hotel for months and now we’re in temporary accommodation. I don’t know where we’ll end up next, or when we’ll be able to have a home to call our own.

“This year, my daughters agreed to cancel Christmas. They’re normally hyped about it, but I think they’re trying to take the pressure off me. The only thing they asked for was whether we could still have a turkey dinner.”

Shelter gives free housing advice 365 days a year. Their walk-in centres, online advice and telephone experts have answered 5 million requests in the last year. No one should fight bad housing or homelessness alone and by donating to them, you’ll help someone get a roof over their heads.