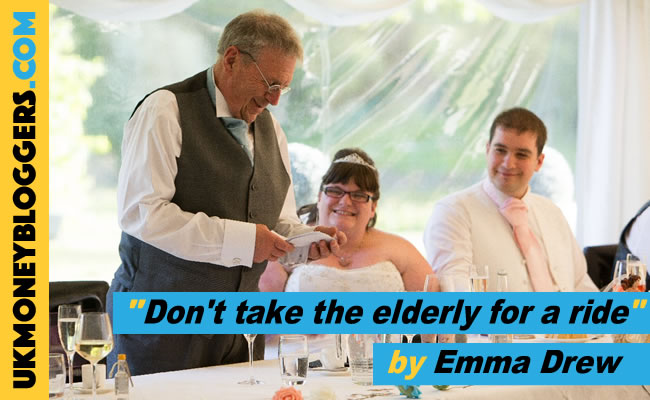 This week’s Loose Change article is by Emma Drew, who blogs at EmmaDrew.Info about ways to make money, save money and live the life you want. She lives in Cambridgeshire with her husband and cats.

Let me tell you a bit about my dad, Steve. My dad is a retired electrician in his early 70s. He spends his summers gardening and fishing, and his winters waiting for summer to come round, so that he can garden and fish! He is regularly called upon for anything from DIY help to helping me make big decisions in my life. He’s one of my favourite people in the world!

My dad is by no means stupid, however if you put him in front of a computer, he can just about navigate his way to Freecell and sometimes Spider Solitaire. Despite my attempts, he has absolutely no interest in doing anything online. Yes, I’ve told him about Netflix, and about reading my blog, but he’s happy to not even bother with all of this.

It infuriates (yes, infuriates!) me when scammers try to tell him that his “internet has been hacked”. The first time it happened he was quite worried and tried to follow their instructions, but thankfully it all went pear-shaped when the screen he was seeing was different to what the fraudsters expected and they lost interest in trying to coach an “old man” who knew nothing about computers. My dad soon wised up to it and tells them that he doesn’t even have the internet, and yet they persist.

Whilst these scams are commonly warned against, something less scammy and more “let’s take advantage” happened recently. As a money blogger, I love to save money, so once a year I go through my dad’s bills and we look for cheaper alternatives to bring his bills down. It also includes our annual phone call to Sky to ask for a discount. Try it, it works! It means that he often has no idea who his providers are, because they change any time there’s a great deal. This time one of the big savings we made was to switch his line rental provider – it would save him close to £200 over the year, which is not an amount to be sniffed at. We moved him over to a reputable company, and a few weeks later he had a phone call from someone staying they were his new phone provider. They asked him if he was receiving a high number of nuisance calls, which he was. He was offered a free call blocking device which he agreed to. What fantastic service from his new line rental provider!

Of course that isn’t the end of it. He was then charged a massive £90 for this call blocking device. If you have been receiving nuisance calls then you’ll probably think that blocking them is worth £90, but the sickening thing is that the exact same call blocking device sells on Amazon for under £30, with cheaper alternatives available. When I looked into it, it wasn’t his new phone company or anyone associated with them who had called him, but rather some dodgy company with just a Gmail email address. £90 is a massive chunk of my dad’s pension and would almost cover an entire month’s grocery shopping for him.

Preying on the elderly and vulnerable like this really annoys me, and this had made my dad feel pretty rubbish for falling for this nonsense.

Action Fraud Uk has teamed up with some celebrities to make three short videos on keeping yourself safe from scams – I thought they were great, see my review. It’s not only the elderly that are at risk, it could happen to any of us.

3 thoughts on “Don’t take the elderly for a ride”