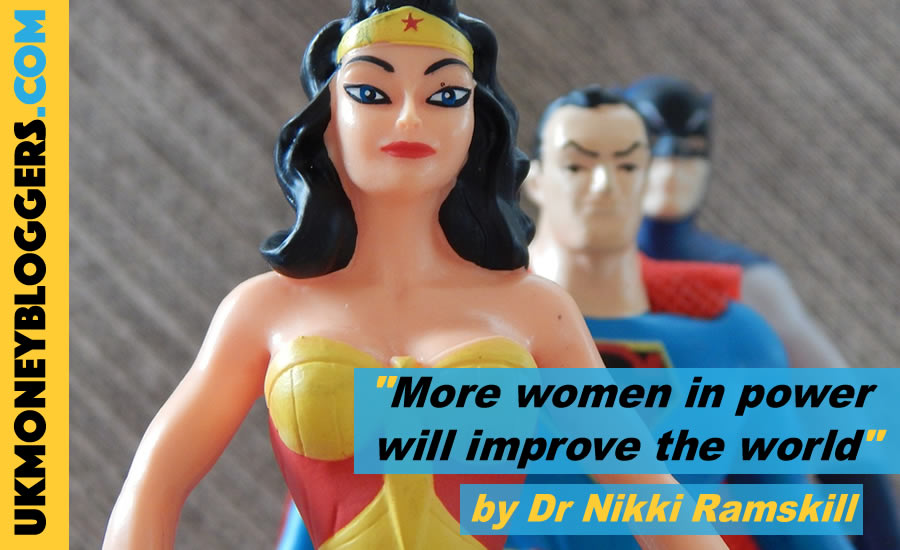 Today’s Loose Change article is by Dr Nikki Ramskill, who blogs as The Female Money Doctor.

From a very young age, my mother instilled in me the strength to be different, and that as a woman, I should never feel that I couldn’t do something. She always encouraged me to follow my passions, and this led me down the route into medical school – a traditionally male career path, but which is now dominated by women.

The majority of doctors under 30 years of age in Britain are now female. This means that women, unfortunately, are still under-represented in the higher echelons of medicine, but this will change drastically over the next few decades, as the younger generation moves through the ranks.

Change, in general, is still slow though. The BBC recently released details of a report into the gender pay gap, and there are many companies who still fall way short of the mark – mainly due to a limited number of women being in the higher paying posts.

So what does this all have to do with my Loose Change article?

Women with money = a better world for all

I’m not just saying this – several studies have shown that if women do better financially, so does their families and society. As a doctor, I am interested in the health needs of the world. In the year 2000, the 8 United Nations Millennium Development Goals were created, with the idea that they would be met (or on the way to being met) by 2015.

One of the goals was to improve maternal health, and one was to promote gender equality and empower women. As far as I am concerned, if these two elements could be improved, the rest of the goals would also improve.

So were the goals met?

Sadly, a lot of goals were not met in some countries, but there were some success stories. The 2015 united nations report has shown that empowering women with access to paid work allowed them to access improved healthcare, better nutrition, have a stronger political standing and limited reliance on potentially dangerous work like the sex trade, which improved their sexual health too.

The more money a woman can bring to her family means that she is more likely to have access to contraception, can spend less time pregnant, and have fewer children overall. As a side effect, this keeps more money within the family unit which can then be used to improve society as a whole through the ability to spend money on necessities and services.

The World Development Report 2012 showed further evidence of success for women. In one study in Mexico, women with money tended to have more respect in their households. Data from Bangladesh showed that women with control over their finances led to higher levels of political participation.

This might seem alien challenges to overcome to us as women coming from a developed country, but the same applies to us too. There are a lot of problems in our own country that need empowered women to help change. The recent UK Money Bloggers #Foodbank Advent Campaign is a testament to the need for more movements in this vein.

Put simply – if a woman has more money to use at her disposal, she can influence everything around her and help improve the lives of others.

What Next for Women?

We still have a long way to go when it comes to achieving gender equality, but then we have only seen real change happening for women since the suffrage movement at the end of the 19th century. We do have some catching up to do! Never before though has the future looked brighter for women.

And if you’re a man reading this? You can also help bring about change by helping the women around you succeed. Empower women to empower themselves. Hold a space for them and challenge men who come out with misogynist opinions and language – this includes making sure our children are not exposed to this kind of behaviour so they have a more enlightened upbringing.

So what can I do?

Women need to be the change we want to see in the world. We can’t expect to be able to take on the “powers that be” if we are flat broke. We need money, and above all, we need time which means being financially free.

Now obviously, not everyone wants to be the next female prime minister, or have a multi-million/billion-pound company. If all you’re trying to do is survive the week, and make sure there is milk in the fridge, then fine, but if not you, then who? Another man who is willing to put in the effort and time to succeed? We are ALL capable of putting our mark on the world, and as women in developed countries, we have a responsibility to do so.

Take care of your debt, raise your savings, invest your money and then GIVE. Give your time and give your money. Employ a cleaner so she can raise her own family, use independent shops, and support your friends in their businesses where you can. We are all connected, and we can all improve society if we work together. Wealth IS NOT just for the few.

Thank you for stopping by to read my article today. I hope it has inspired you to keep reading and learning in your own pursuit of financial independence and freedom.