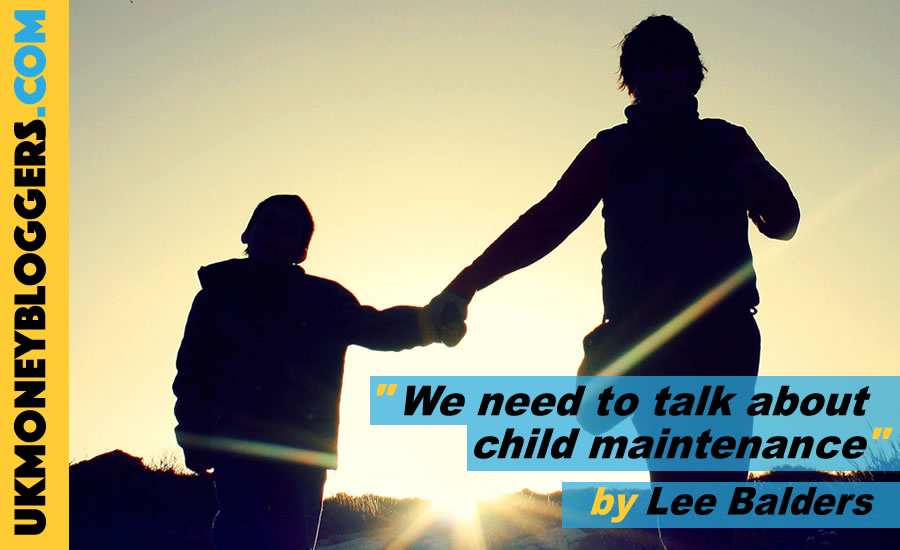 What’s missing from the financial news?

Child maintenance (or the lack of it) is a regular part of millions of British families’ finances, with around 2.9 million single parent households (86% of which are headed by women), so it should follow that the mainstream media as well as financial bloggers would cover it as part of their regular routine. As a money blogger I’ve noticed that personal finance (and family finance) blogs abound, but there are few that deal with child maintenance, despite this expense/income being a relevant part of millions of readers’ lives.

Almost £4 billion is owed in child maintenance arrears, and most of that will go unpaid. Yet this scandal is almost entirely ignored, whilst the image of the teenage single mother on benefits is set as the figurehead of everything that’s wrong with society, and the focal point of national scorn. Yet, the reality is that fewer than 2 percent of single mothers are teenagers, and most single parents are in work.

Why is this? We all know that two people are required to create a child, yet when a woman is left to support a child on her own and needs assistance from the state, she is the one vilified, and the man is not. This points to a deep-rooted misogyny in our culture.

The assumption is that the onus is on the woman to avoid pregnancy, and when she fails to do so, she is subjected to Victorian morals that the rest of society have, as a whole, rejected. It’s alright for this to happen, we unwittingly reason, if she takes some of our money. This view of single parents is outdated.

Interestingly, this stigma is seldom applied to wealthier mothers who are able to adequately support a child on their own. The public shaming only happens if you’re poor enough to have to ask for money.

Why do we ignore it?

We don’t want to have to pay for someone else’s mistakes and poor life choices. Yet we roundly ignore the choice made by so many non-resident parents not to pay child maintenance.

Talking about money is a nightmare for Britons, but talking about someone else’s money is worse. Having to hear painful stories about breakups and divorce is toe-curlingly painful. It’s not our business and we want to keep it that way. Yet we can’t afford for government to echo these feelings and sweep the child maintenance scandal under the carpet.

Non-resident parents are invisible. They could be your workmates or neighbours, and there would be no way of knowing whether they had a financial obligation to a child unless they told you. Of course, no-one wants to snoop around in their workmates’ or neighbours’ personal affairs, so if there are financial obligations to children that are going unmet, they will go unnoticed. Unlike the single parent who has the evidence of their condition present in the form of a child, the absent parent who refuses to pay flies under the radar and is not marked for society’s scorn.

It’s impossible to open a debate about benefits without hearing the words “cheats” or “scroungers” thrown in. Benefits claimants – even genuine ones – are often made to feel ashamed for taking money from our collective purse. Tax dodgers infuriate us – they aren’t putting their share into the collective purse, so those of us who do feel cheated. So why don’t we direct the same anger towards maintenance “cheats” or “dodgers”?

It’s time to face up to the facts about single parents and child maintenance. Most single parents do not receive any child maintenance at all. Many non-resident parents simply refuse to pay by choice, and would rather risk snowballing fines and prison than pay. They do this because the likelihood of being pinned down to these penalties is very small, and the likelihood of public shame is near non-existent. A National Audit Office report in March 2017 found that at least £3bn in child maintenance payments ordered by the former Child Support Agency (CSA) may never be paid.

The Child Maintenance Service is aware of the tried-and-tested loopholes of self-employment and/or company directorship used by non-resident parents to evade child maintenance. Still, these loopholes have been allowed to exist for decades. Using these loopholes means diverting or hiding income, which is tax evasion. Parents with care are told to inform HMRC about the tax evasion, but still, nothing is done.

HMRC has the means to hold these maintenance/tax dodgers to account, but it seems there is no appetite to do so.

Shouldn’t there be, though?

Ask yourself, which is worse – cheating the taxman or cheating a child?

All of us should be aware of the missing maintenance scandal. Talk about it – it’s the first step to bringing it to an end.