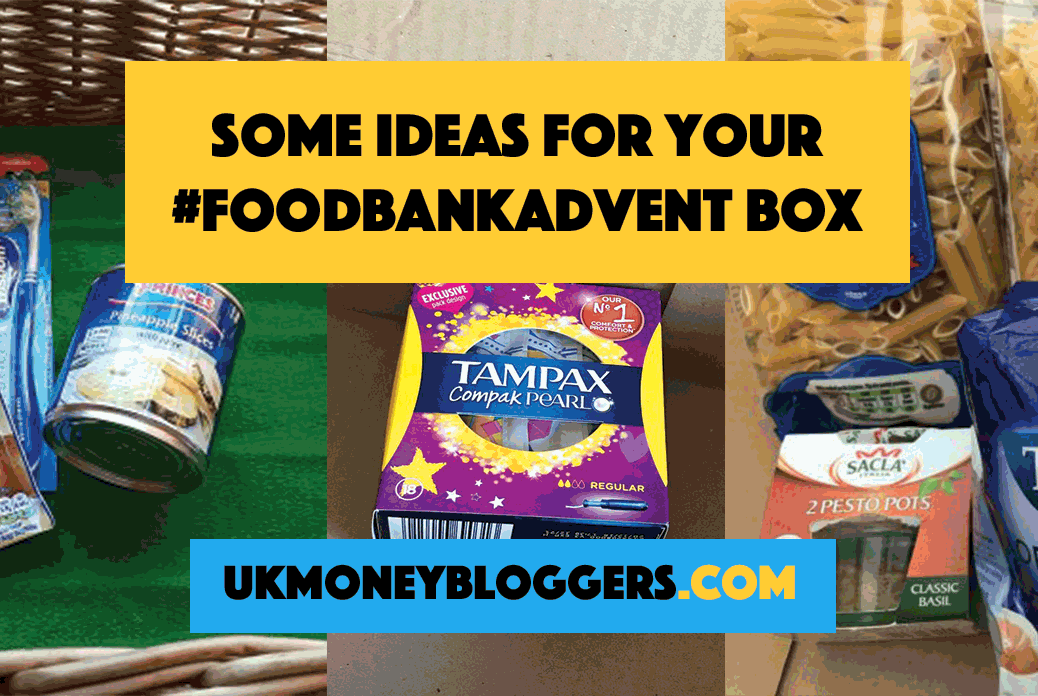 Not sure what to include in your #FoodBankAdvent box? Here’s what some of the UK Money Bloggers have included so far.

The UK Money Bloggers’ #FoodBankAdvent Christmas campaign launched this week and donations are already off to a great start with many bloggers and readers already adding one item a day, for 25 days, to a box destined for their local food bank.

The idea is to collect items during November, which can then be delivered to food banks at the start of December, ready for distribution before Christmas.

Read more about the campaign and why we think no one should go hungry at Christmas.

What should you include in your Food Bank Advent box?

Interested in filling your own #FoodBankAdvent box? Focus on long-lasting, non-perishable tins and packets. The Trussell Trust lists the contents of a typical food parcel here.
However, it’s worth contacting the food bank in your area, to find out what they need most. They might have a glut of pasta and baked beans, for example, but really need long life milk. Food banks also give out non-food items like essential toiletries, sanitary protection, laundry products and baby items like nappies and wipes.
You can find your local Trussell Trust food bank here, but there are other food banks up and down the country.

If you need some inspiration, here are some pictures of what a handful of UK Money Bloggers have donated so far:
Di from Super Lucky added shower gel, noodles and suitably seasonal mini cheddars:

Kalpana at Mummy Money Matters kicked off with Tampax:

Personally, over at Much More With Less, I’ve gone for quick cook mac ‘n’ cheese, a toothbrush, and some tinned pineapple in a ring pull can:

Day 3 of #FoodbankAdvent: added a tin of pineapple, as fruit is so expensive when money is tight. Ring pull can so no tin opener needed. pic.twitter.com/jqRiPQig9D

It doesn’t matter when you start either. Andy from Be Clever With Your Cash began his almost a week after everyone else, starting with a pack of biscuits. Even if you start things off in December you can then donate in the new year.

After an eventful trip to the supermarket, Hollie at Thrifty Mum will be adding some bonus chocolates to her reverse advent calendar:

Thank you to Theresa from our @sainsburys Local 💋who helped James out of his biggest tantrum so far! 🤦🏻‍♀️ He had a full on layout in the middle of the aisle, 🙇🏼 snot all over the tiles and 100% refusal to shift ⛔️ Theresa came to the rescue with chocolate 🍫 This little Halloween bag of choc eye balls Made. His. Day 😂 To be fair, she could have given him an empty box or used till receipt 🤷🏻‍♀️ He was just happy to have something he didn’t have to share with Little Ted 💁🏻 Journey back to the car was restored and to pass on the kindness, we’re adding the chocolates as a bonus gift in our reverse advent box for our local food bank in Cottingham. And…relax. It’s definitely been one of “those days” 💆🏻🍷 #foodbankadvent #notallheroeswearcapes

Lynn aka Mrs Mummypenny started over on Instagram with a can of baked beans:

While Chammy from Chammy in Real Life added rice as her first item:

Today is the start of my #FoodBankAdvent campaign. This pack of rice went into the box to kick things off. Everyday for the next 25 days I’ll be adding an item to my box for a reverse advent calendar. This box will then be taken to my local food bank ready for distribution in time for Christmas. If you’d like to take part or see other ways to help then check out the link in my bio. #UKMoneyBloggers #givingback #Reverseadvent #reverseadventcalendar

Meanwhile Kara from My Best Friend’s Guide to Cash recommends including plastic bags and bags for life, as the 5p charge has created a need for carrier bags:

Have loads of reusable shopping bags? Add them to your #foodbankadvent donation box as they’re now much needed thanks to 5p charge pic.twitter.com/mHVGO00WEv

Jane at Shoestring Cottage decorated a box to encourage her workmates to take part, so they could share the cost between them:

Reverse advent food bank collection is coming on wonderfully at work. Such a simple idea and it’s not too late to start. Place one non perishable item in the box each day for a month and then donate to your local food bank to help people at Christmas. Check out the Trussell Trust for details of where they are and what to donate #FoodBankAdvent #donatetothefoodbank #foodbankadvent #foodbank

Do share pics of your own reverse advent calendar on Twitter and Instagram, using the hashtag #FoodbankAdvent
If times are tough and you might need support from a food bank, ask for a referral from a health visitor, doctor, social worker or someone from the council, police, health centres, children’s centres or Citizens Advice.

One thought on “Some ideas for your #FoodBankAdvent box”