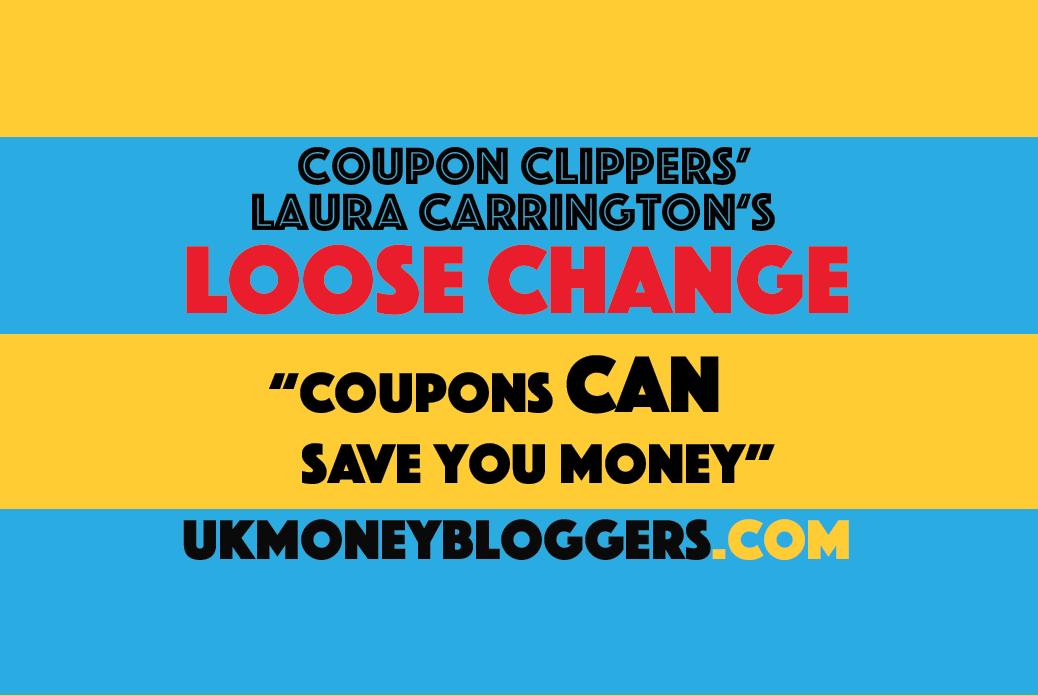 Laura loves coupons so much she’s set up her own blog Coupon Clippers. So it really irks her when people say they’re a waste of time. This week we’ve handed Loose change over to her to explain why she believes every saving counts.

There are a LOT of misconceptions surrounding the use of coupons and if they are actually saving you money. I have to say that I can get a bit ‘tetchy’ when I hear them (probably the understatement of the year!).

This blog will hopefully put pale to some of that ideas and show that with proper usage they can indeed save you money!

I often see people jumping to conclusions before they have looked at coupons and find that usually it is down to a ‘fear of the unknown’, not really understanding it fully or the fact that couponing is not for everyone. Some people just don’t ‘get it’ and can’t do it and that’s ok. Dismissing them completely and berating those that do with ill-informed excuses is not!

Coupons and rebates have been around for eons. However it seems to me that a certain American TV show and the economic climate has made their usage more prevalent and has spurned the decade of this EXTREME couponer tag name. With the rise of digital coupons via cash back apps it would be a little silly to not at least consider them as a viable way to save money on your shopping when the average household in the UK is forking out nearly £3000 per year on food alone(! The majority of us are feeling the pinch and tightening our belts where ever we can. Coupons can help with this.

The most common misconception that I see is that people assume that couponers in the UK are trying to replicate the shopping trips and saving show on the TV in America with just paper coupons alone. False!

UK couponers know that here we do not have the amount of paper coupons that they have in the USA. Besides the TV sensualising those trips into a form that is probably not even do-able in the USA let alone anywhere else! UK coupons are generally for higher amounts of money off and there are more available for free items.

Proper couponers here in the UK do not just use coupons on their own! They are a very valuable asset to a money-saving arsenal. Paper coupons from magazines, newspapers and the internet are combined with digital coupons via cashback apps, store offers, reduced to clear items, wombling, store price matching and many more.

Know what you are doing!

We recognise the psychology behind shopping and why companies give out coupons. They do it to SELL items and hopefully make a profit. They try to entice people to try products at a reduced rate so that they can get them to keep buying the said item after the coupon or offer has gone. Yet we turn this back on them by not being store or brand loyal.

We have a list of maximum prices (mine is actually written down lol!) that we are willing to pay for an item. These are generally based on what it would cost to buy a value version of the same type of product. If a coupon or a cash back offer means that a branded product matches that maximum or beats it then we will stock up with enough to last us. If it doesn’t, then we won’t, it’s that simple! We may lay in wait for a better offer to come up then ‘pounce’ if it does! If that doesn’t happen, then we don’t use the coupons for the sake of it, we move on to the next.

Couponers compare the costs of items in different stores to make sure they are getting a bargain and the best possible deal. The art of couponing properly is not blind!

I also see people stating that couponers are wasteful of products and time. False.

Making purchases you don’t need and stockpiling (hoarding in some people’s opinion) things you won’t use are valid points but for a true UK couponer, these thoughts pass through your head the very moment you see a coupon! As soon as a new coupon/cash back offer becomes available we think “How much is the coupon for? How much will it cost me to get the coupon (yes, we consider printing costs!)? How much is the item? Has a store got an offer on? What price will that item be after the coupon? Does that match or beat our maximum prices? Will I (or someone I know) actually USE the item? How much will it cost to get the store to get the items? How many do we need?” Basically is the coupon or offer worth it?! This takes a few seconds and if it is deemed worth it, we go for it! If not then we leave it.

Best before and use by dates are taken into full consideration when using coupons. So it a household’s usage of the products in question. No, we don’t stockpile months of perishable foods for them to go off and be binned. Yet we do stockpile enough non-perishable items to last us for a certain time. Again couponing is not an art that you go into with your eyes closed!

In terms of time, yes I spend a fair bit of time on my hobby and yes I spend a bit more time trying to help others out with it too! However, I am actually writing this blog at work so umm……………………..! Time is money remember!

Note I call couponing my hobby. Other people have computer games, books, tv etc. I have my coupons. Don’t get me wrong I do have other hobbies too but coupons have worked their magic on me and have become a daily activity. In the beginning finding coupons can be hard and take several hours from your week. However with practice you’ll know the places to look and you’ll be poised, ready and waiting for a new coupon to be released.

My rationale (and many others) to couponing is a strategical approach. My coupons are on a par with the money in my purse! A saving is a saving, even if it is small. Using 1 coupon a week will help with bills. As long as you follow the basics of using them properly.

In terms of time, you reap what you sow! Couponing cannot be given to you on a silver platter! You do have to work for it, but the outcome is that you CAN save money by using them. How much time do you put into working hard to pay bills? What’s a couple of hours a week to try and save some of that money?

To those who have slated coupons. I don’t begrudge anyone their opinion. However I have seen some pretty poor excuses and others slating other people’s ideas as they were a little further from the ‘norm’. Just because you can’t do it, doesn’t mean they shouldn’t give it a go! I say don’t be afraid of admitting your own pitfalls!

Try it, you may like it! Don’t be afraid of imagination and thinking outside the box! If you still can’t do it, it’s ok to admit it 🙂

Coupon Clippers is mainly focused on how to use coupons and cashback in the UK, and also looks at other money saving methods, ideas and current issues.