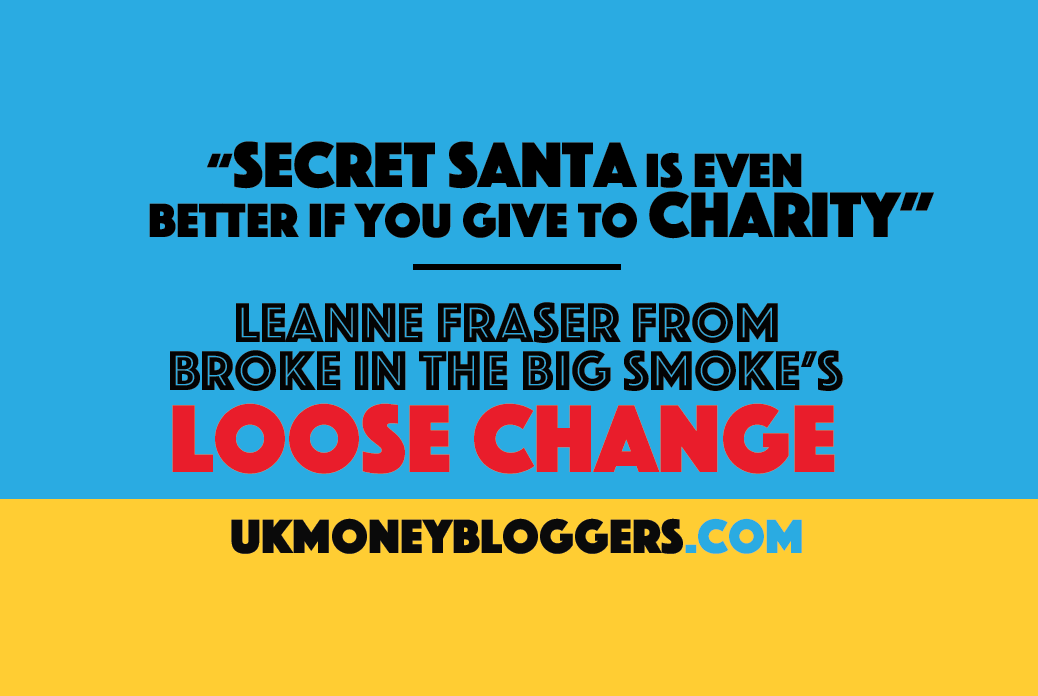 This week Leanne from Broke in the Big Smoke shares why she’s doing Secret Santa differently this year.

I’ve finally caved and turned on the heating, winter is here, the Coca-Cola advert’s been on the telly and Christmas is most definitely coming all we really need now is some snow!

I have to admit though, I’m not the biggest fan of Christmas. It’s so over commercialised these days with celebrations getting bigger, and by definition, more expensive every year. To me Christmas is about being kind to each other, spending time with the people that I love and eating way too much food! I can take or leave the whole gift giving component.

That said I do also love the excitement of unwrapping something that’s been specifically chosen just for me. The anticipation of not knowing what’s inside for those few moments before you rip off the shiny wrapping paper to unveil the gift that someone has so thoughtfully selected for me is thrilling. Which is why I think Secret Santa’s are a great way of having the best of both worlds, especially for large groups of friends or in work settings.

I’ve not long started at a new job and there’s already been some discussion around doing a Secret Santa. I love the concept of Secret Santa’s for a few reasons:

Given that I’ve only been in my new job for less than a month though I don’t feel as if I know my colleagues well enough yet to buy any of them a meaningful gift and I doubt any of them know enough about my life to reciprocate either.

The last thing I would want is someone panic buying any random thing for me just because it fits the budget and they feel like they should! I’d only end up with something that I probably don’t want (unless it’s chocolate, you can always buy me chocolate) and I’d much rather the money went towards a much better cause.

Which is why the UK Money Bloggers have come up with the concept of #GiveOrGift – instead of your Secret Santa buying you something you have the option for the money they would have spent on a present for you to be given to charity instead. The giver knows that you’ll be super happy with the “gift”, you don’t end up with something that you neither want nor need and of course the six chosen charities get a share of all of the money donated through the scheme – literally everyone wins!

Of course, if you are the type who loves gifts then you can still choose to receive a little something instead.

Find out more about the #GiveOrGift scheme here.

Leanne Fraser runs lifestyle blog Broke in the Big Smoke, featuring a healthy dose of finance chat for those short on cash.