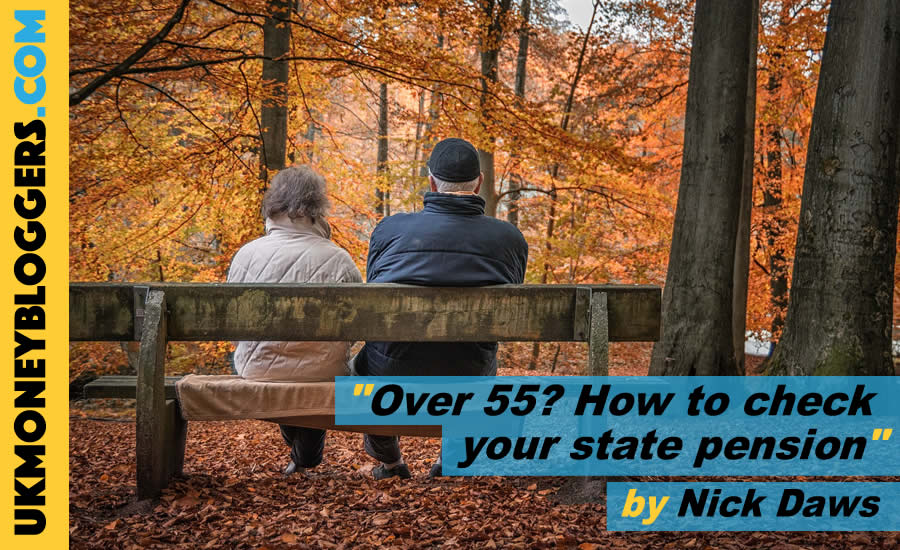 This week’s Loose Change comes from Nick Daws, who blogs at Pounds and Sense covering making money, saving money and investing money, all viewed from a sixty-plus perspective. Nick is a semi-retired freelance writer and editor living in Burntwood, Staffordshire.

If you’re in your fifties or older, the chances are you’ll have given at least some thought to your pension.

Of course, many people will have one or more company or private pensions. However, the state pension is still a significant component of most people’s income in later life. And unlike many company pensions it rises automatically every year at the rate of inflation or above (under the current ‘triple lock’ guarantee). That makes it increasingly important as you get older.

In this article I’ll be revealing how you can check how much state pension you are due for and when. But I’ll start with a few words about the various changes that have happened to the state pension in the last few years and how they affect anyone coming up to pensionable age now.

Speaking of which, let’s start with one of the biggest changes…

It’s unlikely to have escaped your notice that the pension age is rising. At present men can access their state pension at 65, while women get it at around 63. The age for women is in transition at the moment as it rises to equalize with men in 2018.

The changes have, incidentally, had a particular impact on women coming up to retirement age now. They are having to wait significantly longer to access the state pension than for most of their lives they had expected or planned for. After lobbying, the government guaranteed that no woman will have to wait longer than 18 months compared with the old system, but many still regard this as unfair.

You can check when exactly you can start to claim the state pension by entering your date of birth and gender on this calculator.

This is the other major change to the state pension in recent years.

Prior to April 2016 everyone received a basic pension, currently £119.30 a week, but rising to £122.30 from April 2017. This is topped up by additional state pension elements (S2P and Serps) which you accrued during your working life.

Anyone retiring from April 2016 onwards will receive a ‘flat rate’ pension currently worth £155.65 a week from April 2017. But if you ‘contracted out’ of S2P and Serps for some years, you may get less than this. The presumption is that your contracted-out pension will provide another source of income for you, so you don’t need the full flat-rate pension.

Also, to get the full flat-rate pension you need to have at least 35 years of qualifying National Insurance contributions. If you have less than that you will get a reduced pension, and if less than 10 years, nothing at all. In some circumstances you may be able to pay a lump sum to fill in gaps in your record (see below).

Be aware that even if you do have 35 years or more of contributions it may not entitle you to a full pension, though. The government website tells me I have 37 years of full contributions, but because I was contracted-out for a while I still apparently have to contribute for another three to get the full pension (see below).

Confused? I’m not surprised. The rules are complicated and still being tweaked. So to avoid any nasty surprises it is very important to check what you are due to receive as well as when you are due to do so. There is now an official website where you can access all this information in one place.

Anyone aged 55 or over who has lived and worked in the UK for 10 years or more can now visit Check Your State Pension  to get an estimate of how much they will receive when they retire.

Doing this is a bit more involved than just checking your start date on the pension age website mentioned earlier. You have to sign in with proof of identity, so allow a bit of time for this. If you already have an HMRC online tax account, the good news is that you can use this to log in.

Once you have done so, you will see a forecast of how much state pension you will get once you are eligible to start receiving it. This is based on current figures. If, like me, you won’t reach retirement age for a few years yet, it will of course have risen by that time. The site also shows when you will be able to claim your state pension.

My own forecast was that on my 66th birthday in 2021 I would be able to claim the full flat-rate pension of £155.65 a week or £8,121.59 a year. That did, however, assume that I continued to pay National Insurance for another three years. If I don’t do this, based on my contribution record and the fact I was contracted-out for several years in my forties, I will receive a reduced rate of £145.04 a week.

If you’re disappointed by the amount forecast, one thing you can do to boost your state pension is defer taking it. Under the new rules you will receive an extra 1% for every 9 weeks you put off claiming.

Obviously, to benefit from this overall you should be in good health. For women especially, as their life expectancy tends to be a few years longer than men, deferring your pension (if you can afford to do so) could well be a profitable option. In a way this is a form of investment, underwritten by the government.

No special action is required to defer claiming your state pension. Your pension will automatically be deferred until you claim it.

The other thing you may be able to do to boost your state pension is buy extra contributions to fill in any gaps in your contribution record. The rules surrounding this are fiendishly complicated, though.

It is a generous scheme, but the bad news is that it closes on 5 April 2017. You will therefore have to move very quickly now to take advantage of it. More information including a cost calculator) can be found at State Pension Top Up.

If you miss this deadline or aren’t eligible, the options are more limited. You may be able to make voluntary contributions to fill gaps in your record, but generally this must be done within six years of the end of the tax year concerned. So if the gaps in your record go back further than this, it is unlikely you will be allowed to make up the shortfall in this way.

There is also the question whether paying voluntary contributions to fill gaps in your record will be cost effective for you. There is no easy way of calculating this, and I highly recommend getting expert advice if you are thinking of going down this route. Ideally you should speak to a qualified independent pensions adviser, but that will of course cost money. Otherwise your local Citizens Advice Bureau may be able to help. It is also a good idea to contact the Future Pension Centre to find out what options may be available to you.

And your private pension options

Finally, for full – and free – guidance on your options for your private pension pots, the government’s Pension Wise service offers a free 45-minute consultation, either over the phone or face to face. You can book this here.  There is also lots of information about pensions – both state and private – on the Pension Wise website.

One thought on “Over 55? Here’s how to find what your state pension will be”