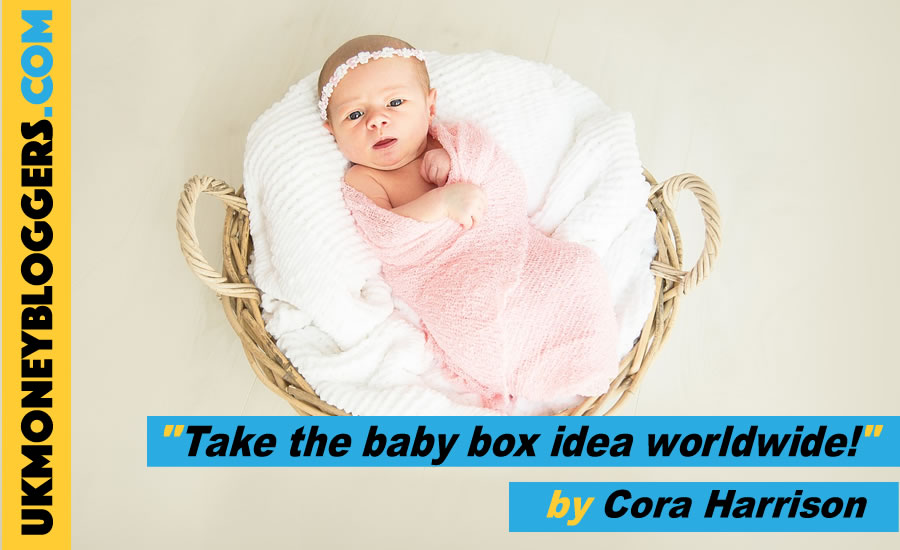 This week’s Loose Change article is by Cora Harrison, a 24-year-old entrepreneur who writes about her experiences of spending less, earning more and living life to the fullest at www.TheMiniMillionaire.com. She also shares daily videos of her life with her girlfriend on her YouTube channel.

In the 1930’s every new mother living in Finland regardless of background or income was given a baby box from the government. It contained supplies such as bibs, bodysuits, nappies and bathing products as well as a small mattress. By putting the mattress at the bottom of the box mothers were able to give their new-borns their very first bed.

Fast forward some 70-years and the Finnish government sent a baby box to the Duke and Duchess of Cambridge, who were expecting their first child. Just like they have been doing for their own citizens for all this time.

Finland has one of the worlds lowest infant mortality rates and this long baby box tradition is being credited as one of the reasons, so it’s no wonder that it’s been gaining worldwide coverage. Whilst there have been many entrepreneur set-up private companies distributing baby boxes worldwide, governments too have taken this on board. The latest being Nicola Sturgeon, the First Minister of Scotland who from the beginning of 2017 has been piloting the scheme in Clackmannanshire and Orkney.

In a move that’s set to cost to the Scottish government an estimated £6 million a year, the box will contain around 40 different items including a changing mat, digital thermometer, fleece jacket, reusable nappies and more. However, with items such as an organic sponge, there’s no wonder it’s come under fire as a PR exercise by members of her opposition cabinet. Nevertheless, many new mums are impressed by the idea and want to see it taken on nationwide.

Scotland aren’t the only ones taking up the baby box idea. In January 2016 one of the for profit baby box companies partnered with US hospitals, government agencies and non-profits in 20 states in order to provide free culturally-specific baby boxes to as many families as possible. Whilst Scotland are using this as a “every child starts in the same place” idea, the US is much more focused on getting mothers to attend anti-natal classes as they do in Finland. “The baby box is a beautiful concept, but it’s not the box itself that has reduced infant mortality rates,” Jennifer Clary, CEO of The Baby Box Co. says “It’s the way [Finland] has used the baby box as an engagement tool to increase health care.”  So, attending these classes is the only way expectant mothers in these states can receive the box.

I personally love the idea regardless of the reason behind it. After all, I put together a very similar basket for my sister-in-law who recently gave birth to her second child.

Do I think it needs to be as extensive as a 40 item kit given by the Scottish government including an Organic sponge? No. However, what I love most is how the US is focusing on ensuring these boxes are culturally specific to the mothers receiving them. A for-profit baby box company in South Africa replaced the cardboard box with a plastic one allowing mothers to use it as a bath rather than a bed, as they deemed it more important for new mothers in their country.

It’s ideas such as that one that ensure that these mothers are getting the most possible out of this box and the reason I’d love to see them rolled out worldwide.

However, it’s not up to me. I’d love to know your thoughts on the baby box scheme. Is it a genius way to give back to the new mothers? or instead just another waste of tax payers money?